⬅ BACK
Abdullah the Butcher ➤
BIO ➤ 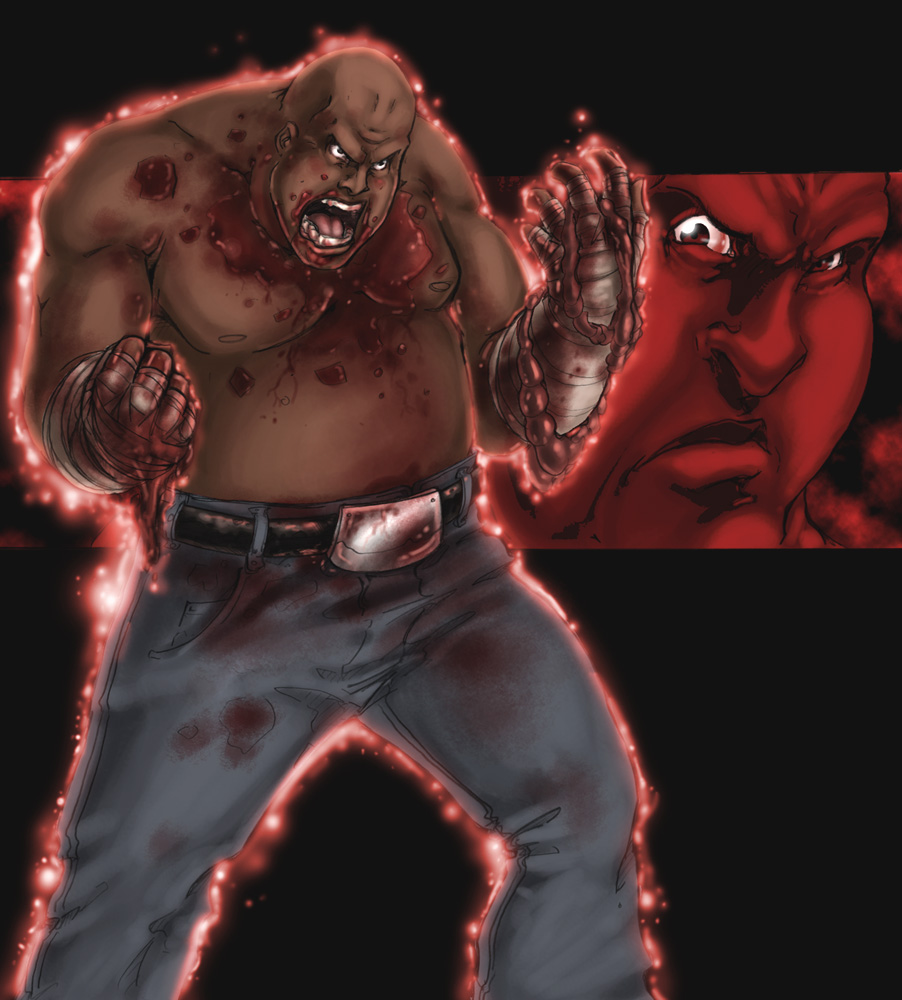 The 2nd most feared man in the mega-metropolis of New Frontier (behind Lourde Bane).  Abdullah the Butcher stands at 6’8, 450 lbs.  He’s been known to cannibalize his opponents after killing them in a street fight and he has little regard for anything but killing and being paid to kill.  Abdullah – the Butcher gives in to all his appetites and he truly does whatever he feels like doing at any given time.

Abdullah is also a highly intelligent man; he chooses to yield to nothing more than the constant and violent pleasuring of his senses.  And as a warrior he is virtually unstoppable. Abdullah the Butcher is Chaos the Destroyer’s most hated enemy.

He and Chaos hate each other so much they literally get physically ill in each other’s presence.  Only pure hatred and rage gives them the strength to stand and fight one another.  Abdullah the Butcher and Chaos the Destroyer don’t even hesitate when it comes time for battle.

When one sees the other they immediately go at it, trying to kill one another.  These two share a history that links them like handcuffs.  Yet, despite their intense hatred for one another there is also an uncanny, deep seeded, mutual respect they have for one another.  Maybe it’s their secret shared history.

Powers & Abilities:  Abdullah the Butcher, like Chaos the Destroyer, is an Imposer of will.  Abdullah possesses an aural energy that allows him to rise to or exceed the physical strength, ferocity and endurance level of any opponent, or multiple opponents in hand to hand combat, or in times of battle.

This aural energy, or aura, is the essence of his will.  This aural energy is so intense that bystanders can often feel the heat emanating from Abdullah’s pores.  The energy from this emanating aura also disrupts the synapses and impedes nerve signals of intended targets. 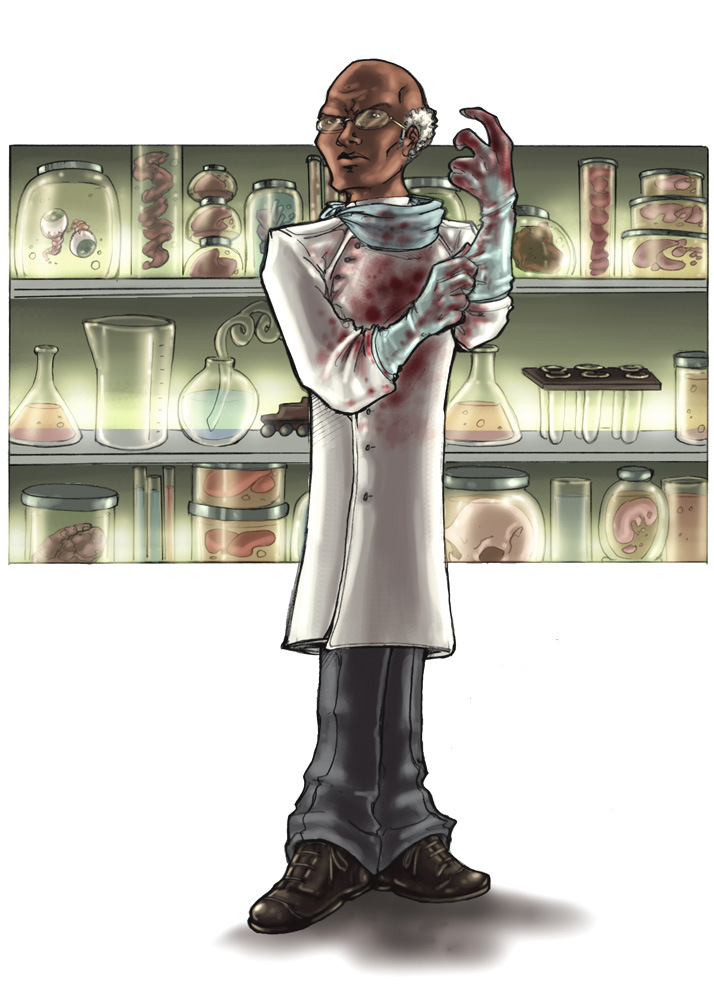 Dr. Kellogg Galapagos is a genius level geneticists and physicist.  Once world renowned Dr. Galapagos fell out of favor in the scientific community for attempting the unauthorized cloning of humans and the crossbreeding of incompatible animal species through DNA manipulation.

Unable to find employment, even in the intelligence community of the US Government, mainly due to Pygmy discrimination, Dr. Galapagos was approached by a silent partner and financed with millions to continue his efforts into cloning and the crossbreeding of animal species.  Dr. Galapagos has now secretly relocated into the Old Warehouse district in the mega-metropolis of New Frontier.

There he is creating various new species he calls manimals.  Creatures crossed with human genes and all manner of animal genes.  Two of his most dangerous yet successful creations are below.  Dr. Galapagos uses these creatures to further his aims, in acts of terrorism and acts of revenge. 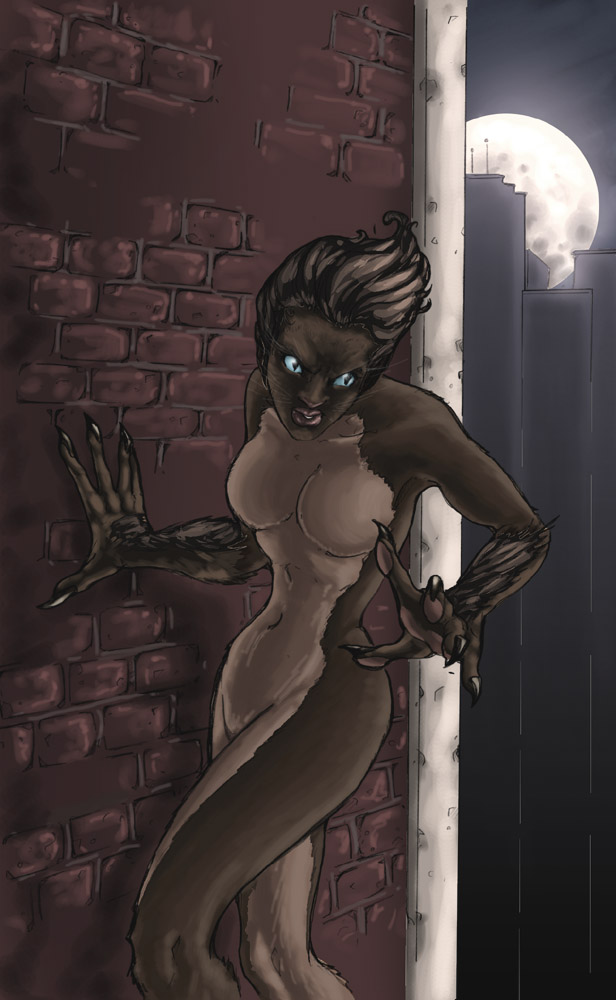 Ferals are half-woman / half-feline creatures who look and act like big cats such as lions and panthers, but also are able to walk nearly upright like humans.

Ferals are covered in fur but it’s a close-cropped fur that sheds very little.  Ferals also posses retractable claws and fangs for both defense and attack. 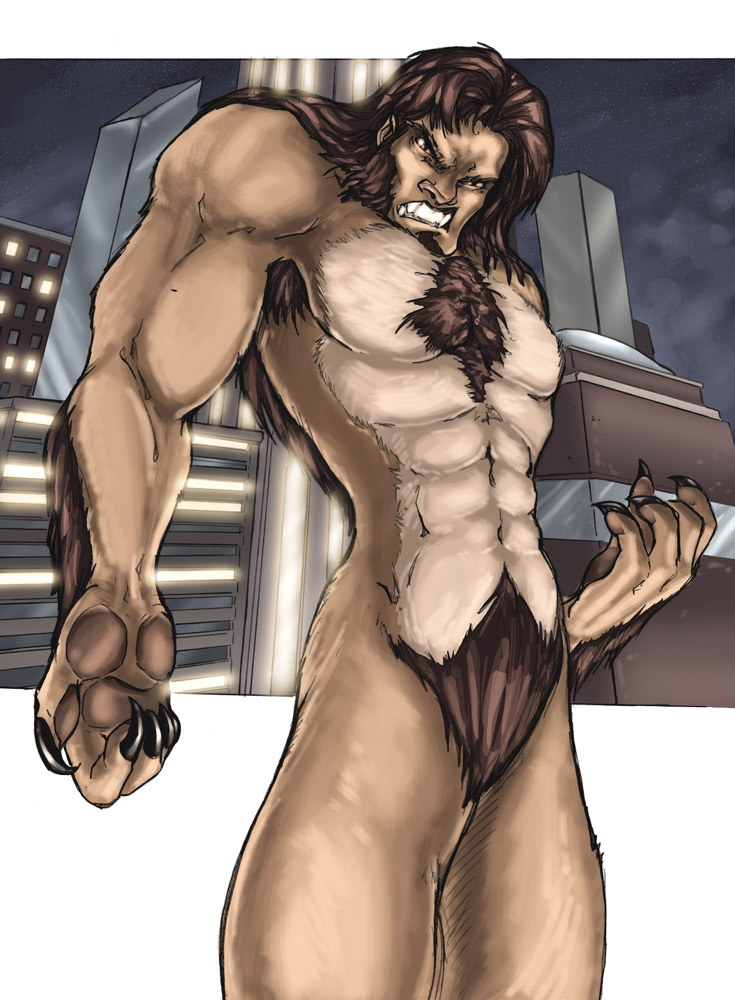 Ferals are half-man / half-feline creatures who look and act like big cats such as lions and panthers, but also are able to walk nearly upright like humans.

Like ferals, alpha males are covered in close-cropped fur that sheds very little and  possess retractable claws and fangs for both defense and attack.

Alpha males however are much larger than ferals and they also venture out mainly at night.  They communicate with a language developed for them by Dr. Galapagos.

Dr. Galapagos is only human in the world who can effectively communicate with them.  The average alpha male is about 6’4 in height, 300 lbs in weight and is extremely quick, agile and able to scale walls. 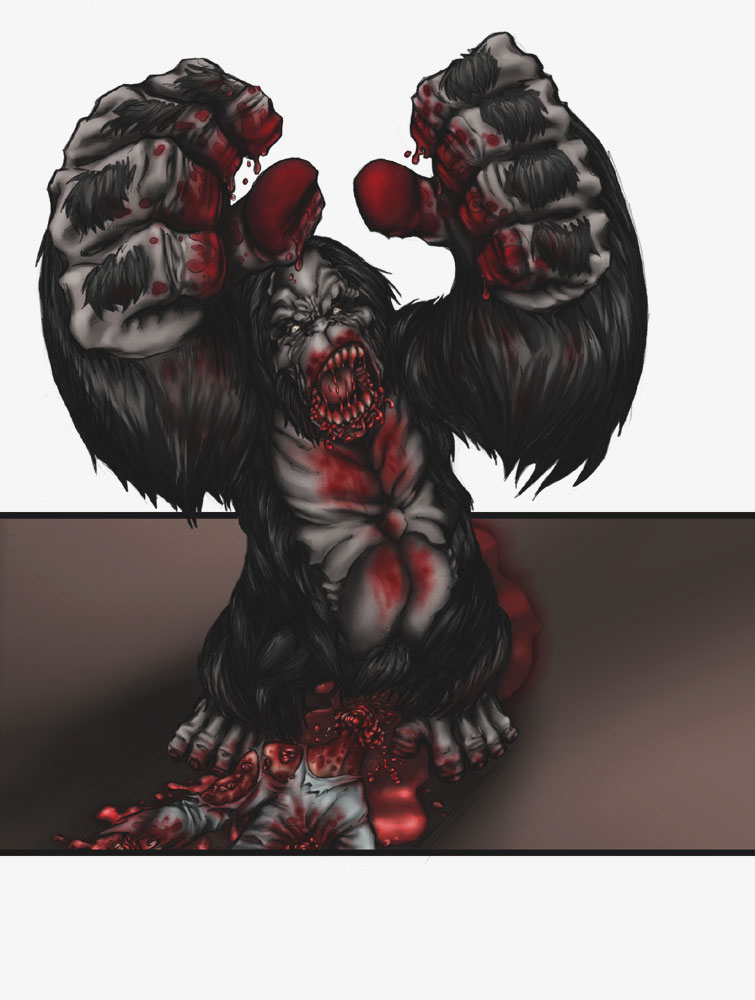 The Kongs are half-man and half-gorilla.  They almost carry the identical body and size of a gorilla but have been genetically altered so that they are able to walk upright as easily as on all fours and their faces resemble more of a human’s than a gorilla’s.

Alpha Males also possess the strength and might of a gorilla and nearly the same level of intelligence as man.  The average alpha male is 6’5 to 7’0 in height and weighs between 500 to 750 lbs.

The Vishnu is a secret society and lineage of personal assassins.  Some would say the Vishnu are even a race because one cannot be recruited into or join the Vishnu, one has to be born into the Vishnu.  Its techniques of assassination are secrets passed down from thousands of years.

The Vishnu wear red, black and white face paint and decorate this paint in menacing ways.  Most Vishnu wear dreadlocks or are bald.  They can perform solo assignments but oftentimes travel on assignment in groups of four.

They have no favorite weapon of choice because they are masters in everything from swords to firearms and use everything from poisonous hypodermic needles poison to man-made bombs.  There are only a handful of people in the world who know of the Vishnu’s existence and even fewer who know the protocol to make contact with them.

Stainless Steel is the most sought after gunslinger and hit man in the mega-metropolis of New Frontier in both the upper and under cities.

He is so sought after because he has never missed a hit.  Stainless Steel is a warrior turned gunslinger and is very mysterious.  He keeps to himself and is rarely ever seen.  Anyone who has a contract taken out on them assigned to Stainless Steel is considered as good as dead.

Stainless Steel usually carries out his hits in expensive white suits, white shoes and white hats.  His only equal in gunslinging is Middle Fingaz the Gunslinger.  Stainless Steel and Middle Fingaz used to compete for contracts, but this was during New Front’s, Degenerate Era.  Middle Fingaz has since retired from carrying out hits. 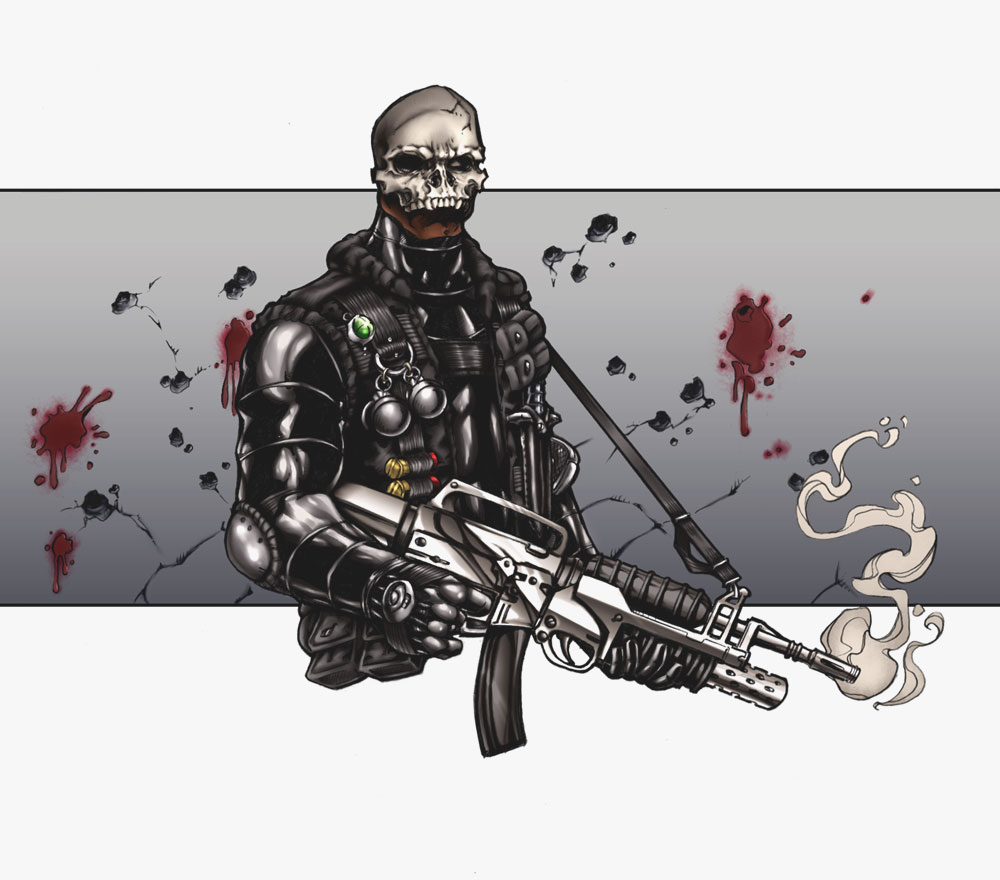 Merciless is a Berserker and one of the most feared warrior-gunslingers in the mega-metropolis of New Frontier.  Merciless sometimes wears a hollowed out skull as a mask and he goes on violent sprees at the slightest provocation.

Merciless wears a patch over his right eye.  He lost that eye during a conflict with Middle Fingaz the Gunslinger who was defending the honor of Silk the Intuitionist.

Powers & Abilities: As a Berserker, Merciless can induce complete and utter fearlessness and rage which, augments his quickness, strength, speed and durability to near superhuman proportions.  And once in this state of self-induced rage, the only way to stop him, like all Berserkers, is to kill him. 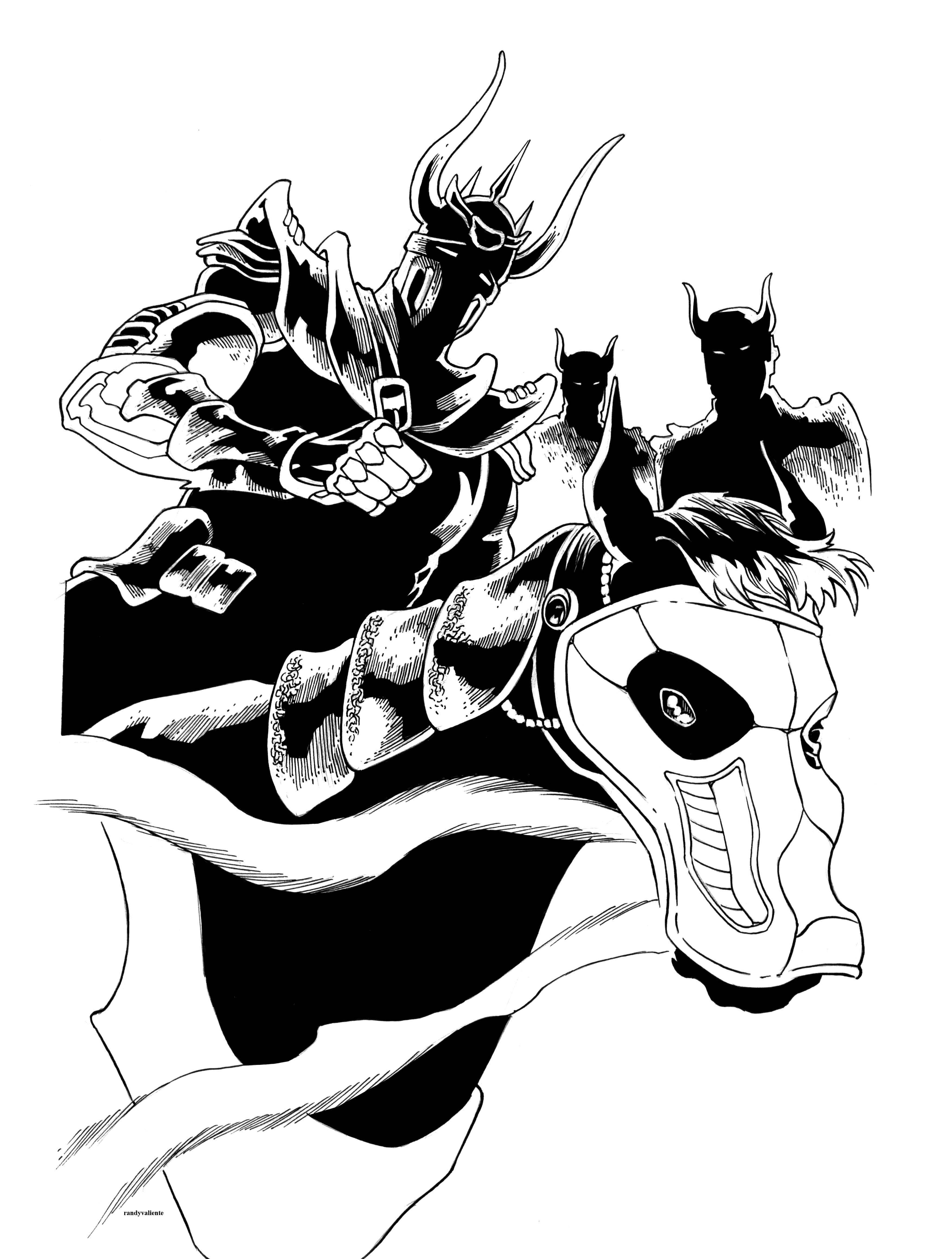 The Dark Stone Riders or, Dark Riders for short, are the army of the Orthodoxy, the governing body over the Church of the Southern Cross.

They are called riders because they usually do battle on massive dark brown horses that are larger than Clydesdales.  The wear armor like their cousins the Dark Knights, but differ in that all their headdresses or helmets have long, pointed horns; the longer the horns the higher the rank.

Dark Stone Riders uses swords like the Dark Knights yet also use bullwhips in battle. 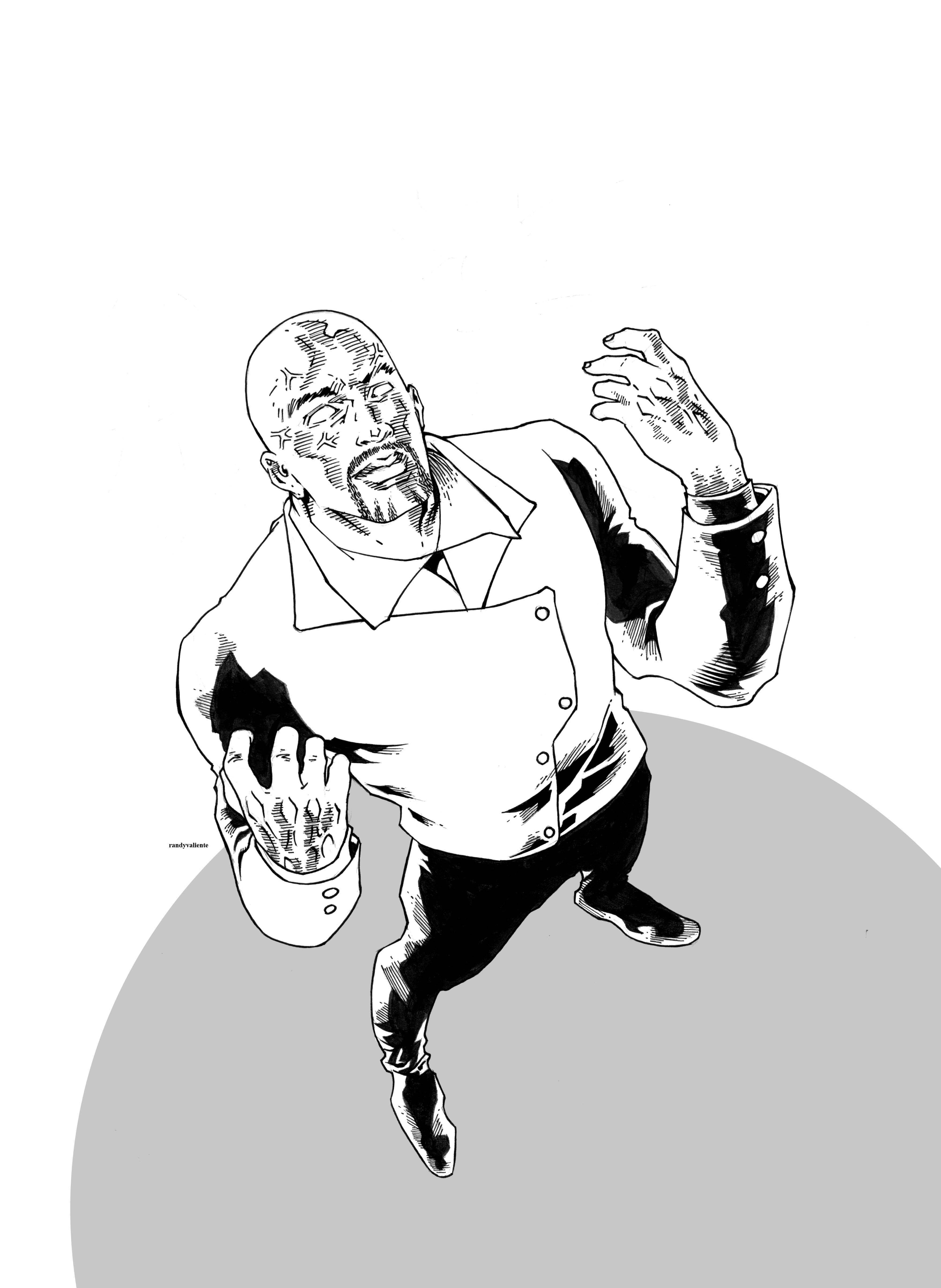 Pathos is a psychiatrist who discovered through self-experimentation how to use his pheromones coupled with conscious hypnotic suggestion to manipulate the emotional states of others.

Pathos tested his ability on several of his clients causing some to commit suicide while others who were suicidal he cured completely.

Pathos enjoys wreaking havoc on the emotional and mental health of the stable while driving the unstable completely insane.  Pathos still operates as a professional psychiatrist in the mega-metropolis of New Frontier.  No one in the city has discovered his secret ability.

He can cause people to feel intense joy, pain, distress, remorse, etc.  He can also unlock mental barriers that most people generally have in place to protect themselves from past emotional trauma.  Pathos can just as easily repair and strengthen these barriers if he wishes, but he rarely exercises this option.‍ 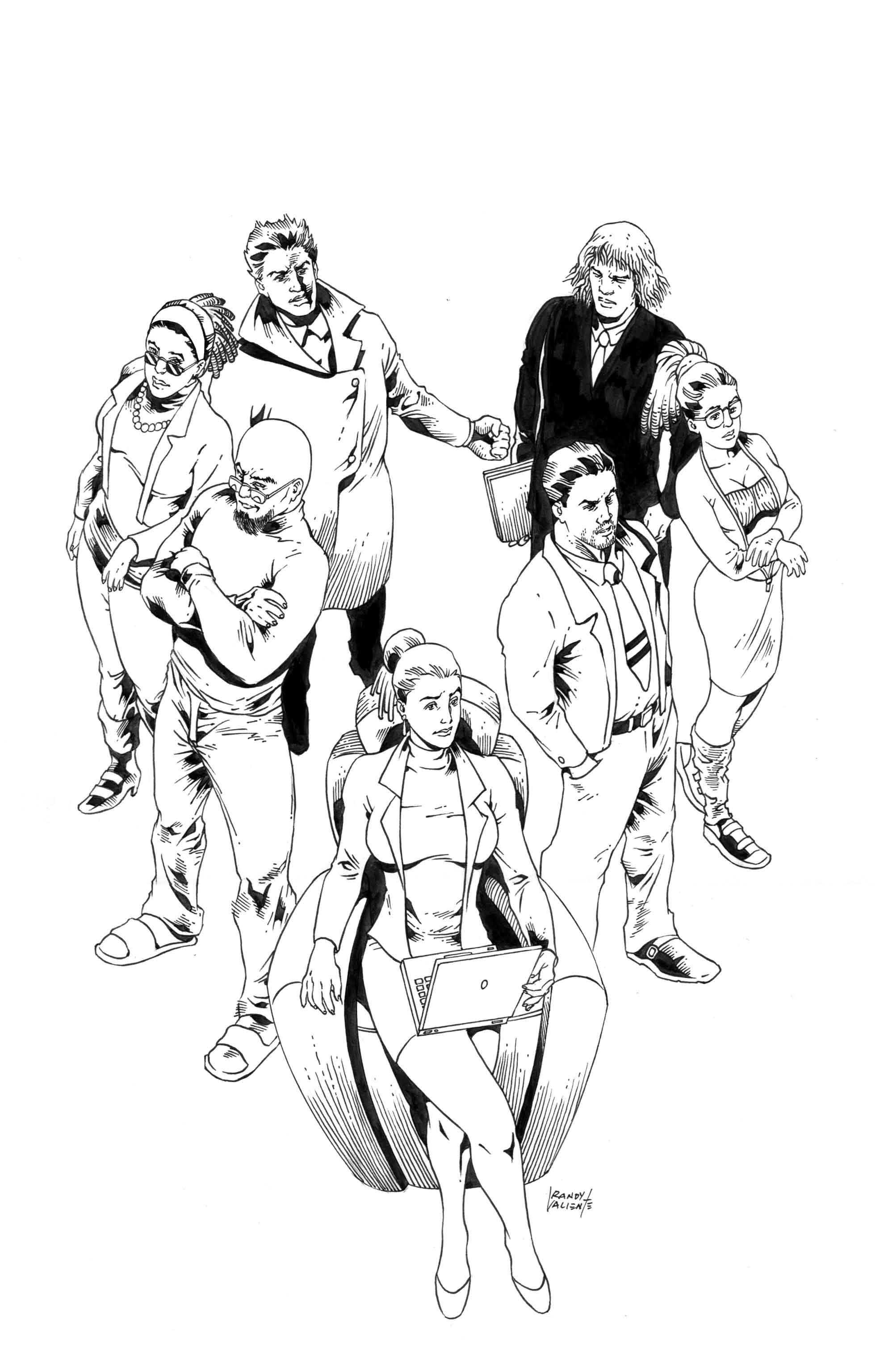 The Hierarchs are seven highly educated twenty-five year olds who plan to rule the world by age forty.  The leader of the Hierarchs is Lisa Love, and to achieve her PhD in Business at Oxford University Lisa wrote a theoretical business plan on, How To Achieve World Domination In 15 Years Through Ownership and Control of Information Systems and Advanced Computer Technology.

Her thesis also included the tenants of multi-tier investing and financing, heavy real estate acquisitions and the establishment of personal armies.  Lisa received an A+ on her theoretical business plan, but it wasn’t enough for her. Lisa recruited a team of highly motivated, amoral, fellow business PhDs and MBAs to assist her in carrying out her business plan to the letter.  These business geniuses named themselves The Hierarchs and created an artificial intelligence platform and computer program called The Hierarchy.

The Hierarchy program is now replacing Windows as the world’s most used computer operating system. Each Hierarch comes from a wealthy family so none are out for world domination because of money.  The Hierarchs want to rule the world simply to prove how smart they are…and because they’re bored.  Hierarchy Incorporated became a multi-national corporation in two short years and its corporate body has a built in secret society including a shadow cabinet, a shadow board of directors and a shadow executive branch that runs parallel to its public corporate offices.

To further assuage their boredom the Hierarchs use their vast resources and wealth to stage hostile takeovers of other corporations, liquidate weaker ones entirely and a few Hierarchs have even bilked their own parents completely out of their fortunes and wealth.  The Hierarchs also enjoy violence, as it appears to be the only thing that really gets a physical rush out of each of them.

The Hierarchs are also among the very small group of people on the planet who are aware of the existence of the 8 Great Gods of New Frontier.  The Hierarchs admire the Great Gods and are thrilled by the challenge of annihilating them and becoming gods themselves. The Hierarchs are: Lisa Love, Caleb, Ashanti, Dak, Holloway, Johnson and Sanford.  Each one is drop-dead gorgeous. 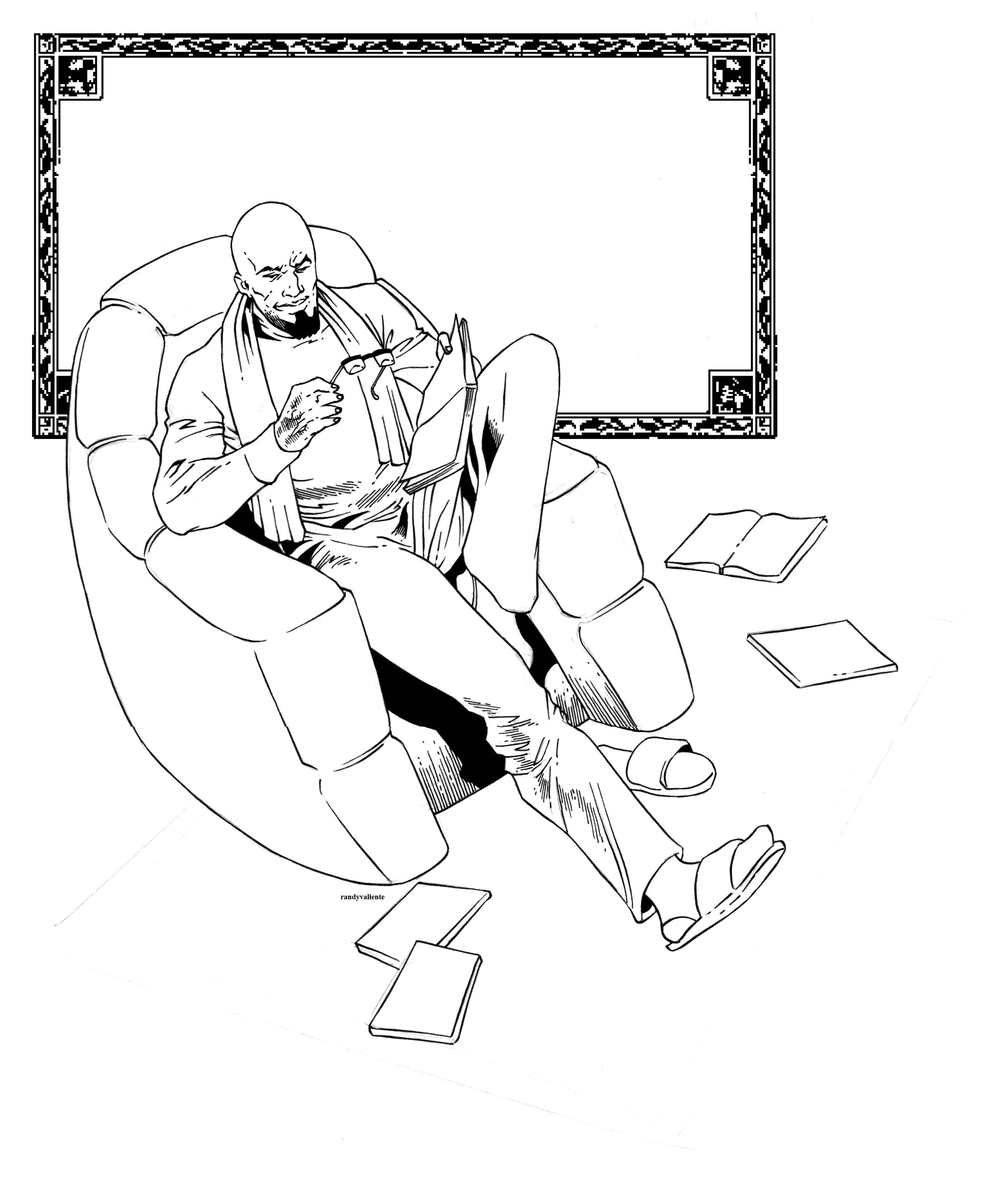 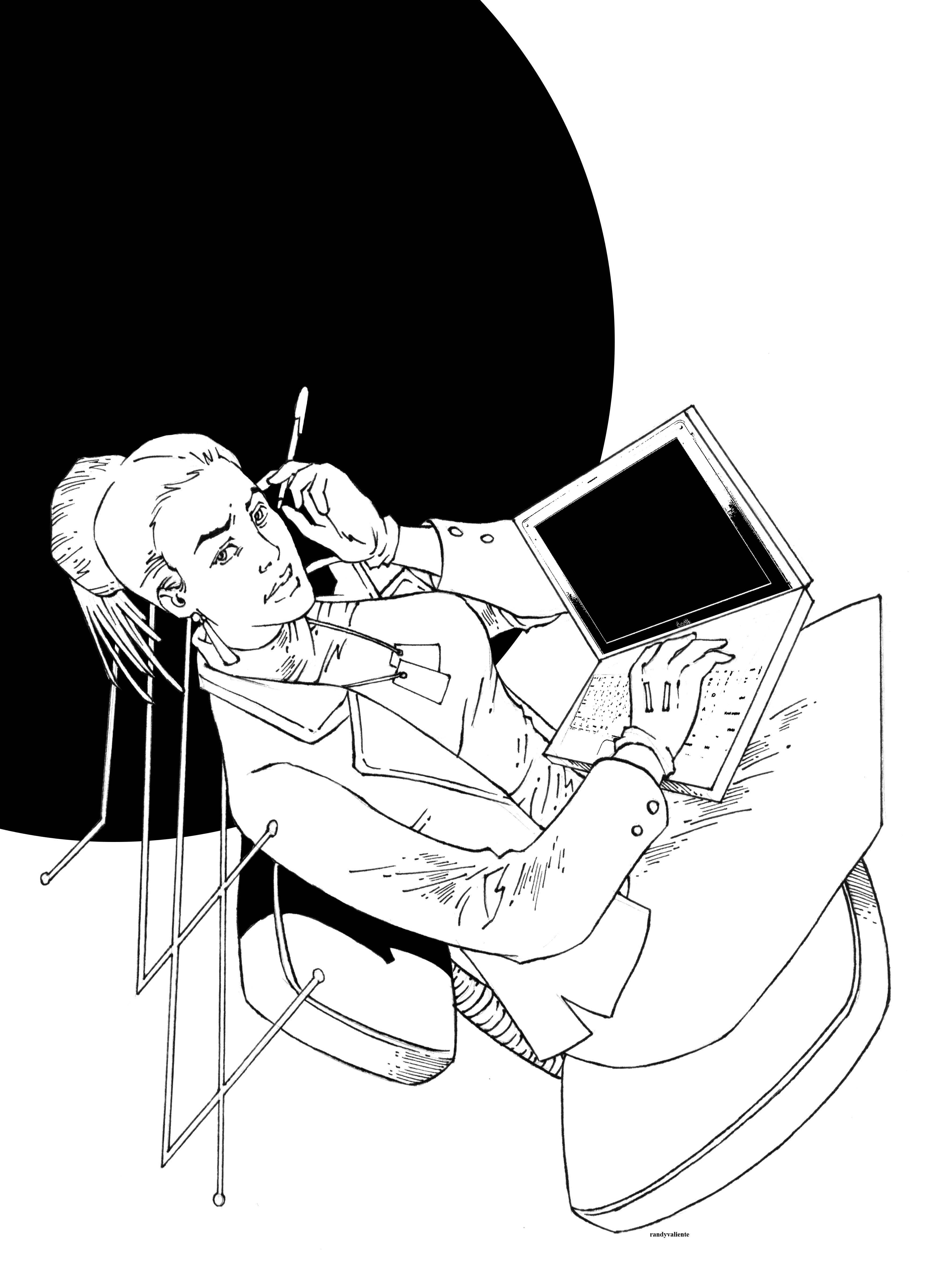 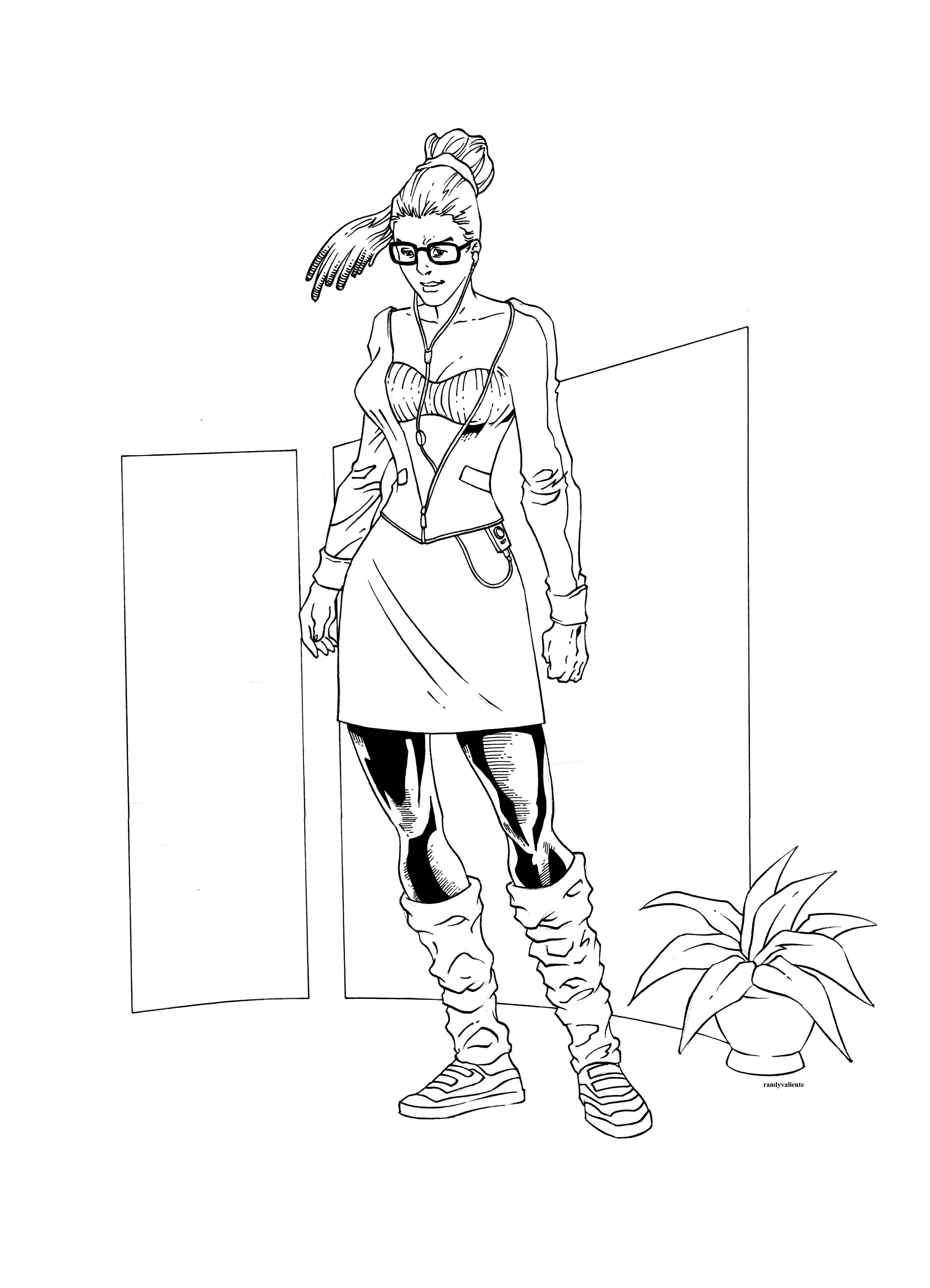 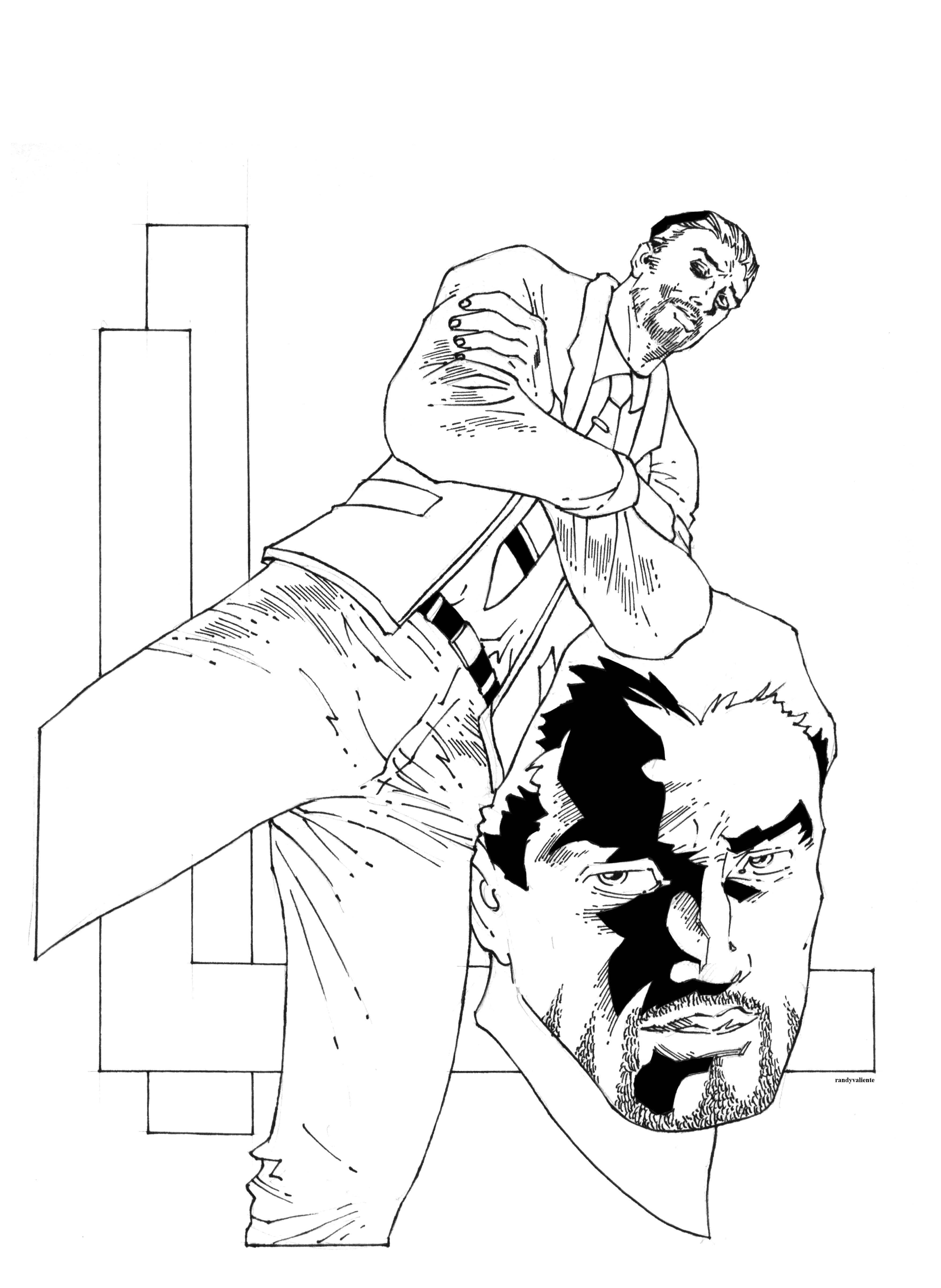 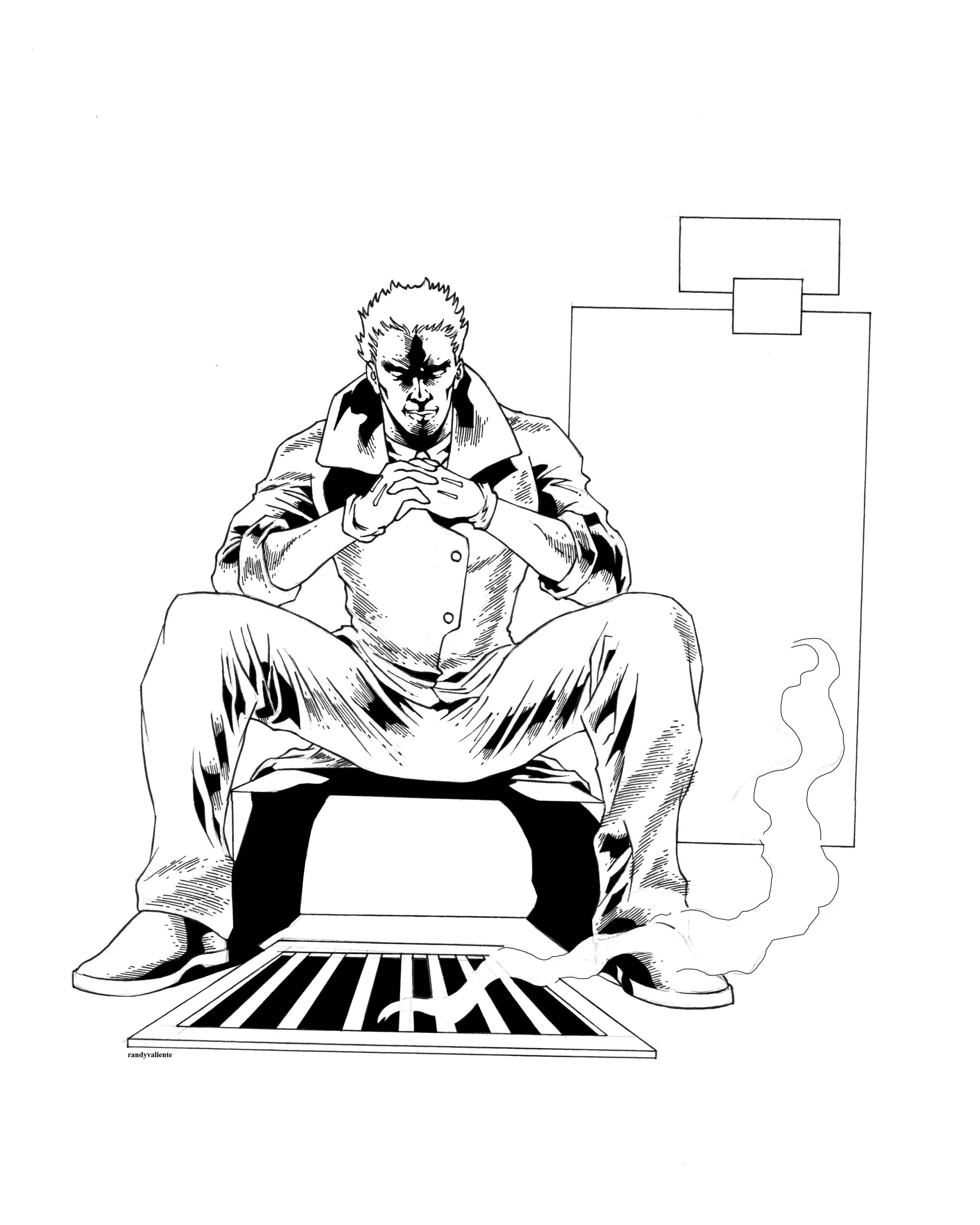 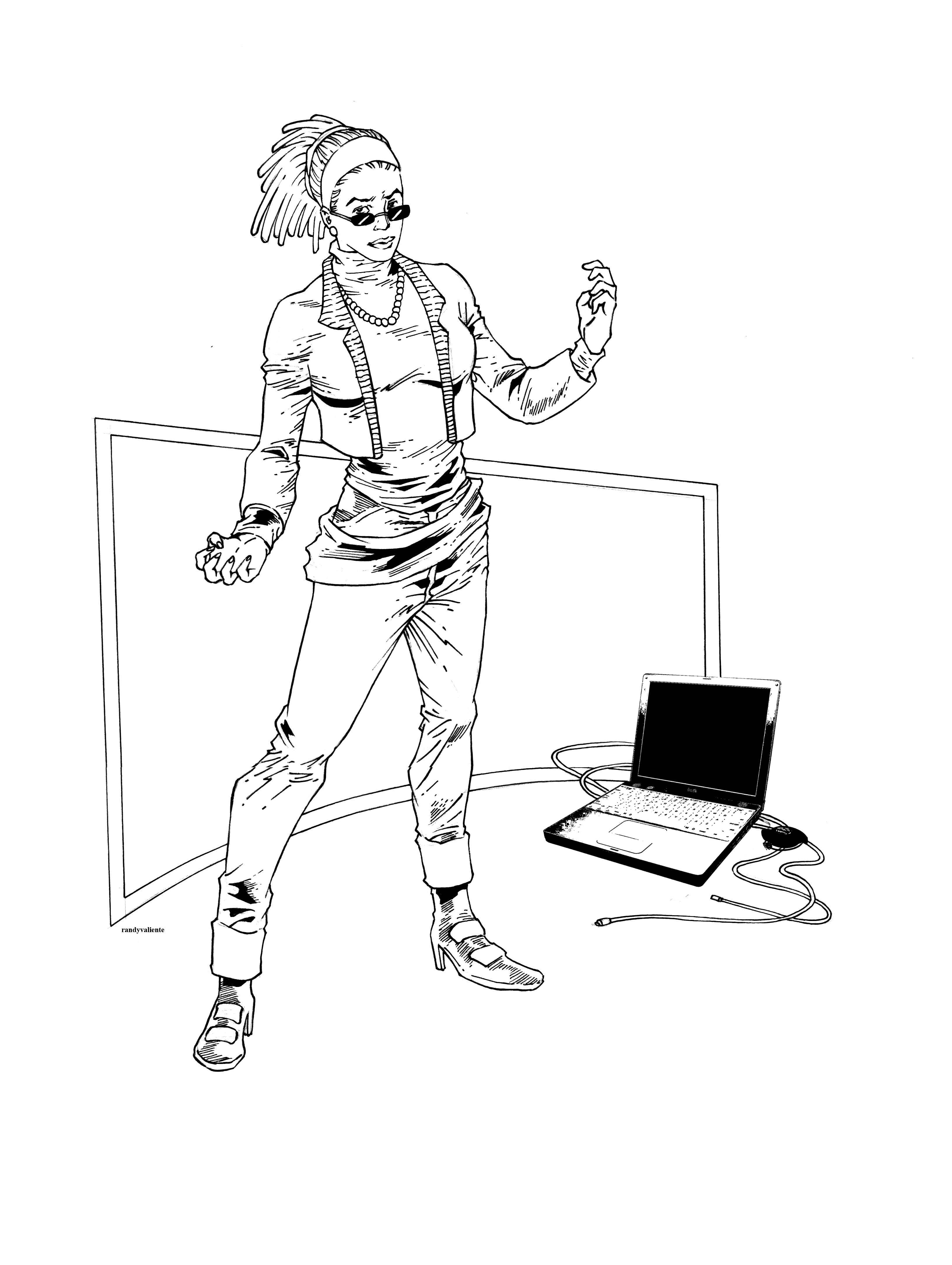 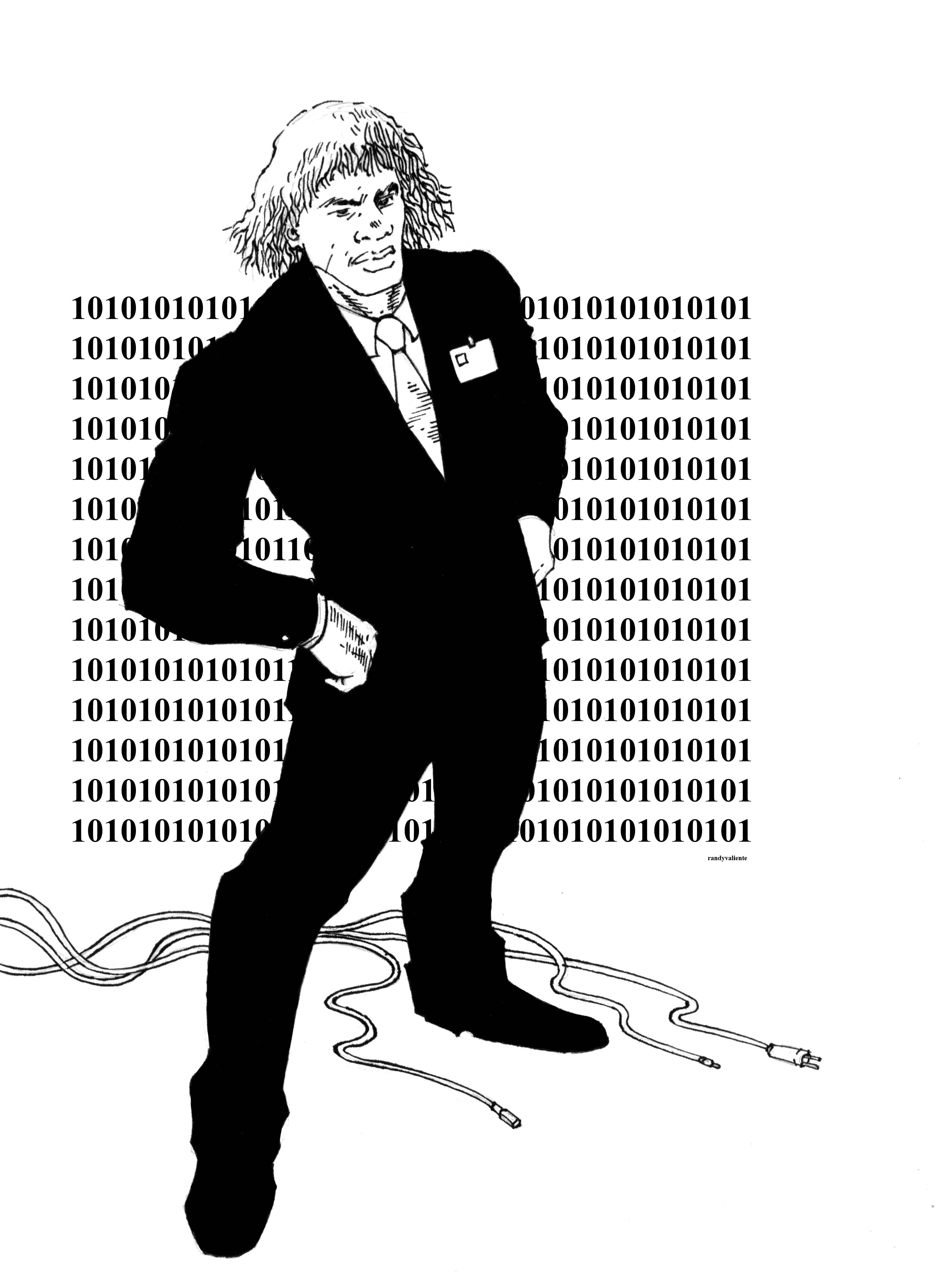